The Trucking Cares Foundation’s Premier Achievement Award is bestowed annually to an individual or company that exemplifies trucking’s spirit of giving.  In recognition of the recipients generosity of time and money, the Foundation will donate to the recipient’s 501(c)(3) charity of choice (such charity shall further the Foundation’s mission).

In addition to her work at UPS, Clifton is a National 4-H Luminary and serves on the Board of Directors for both the Girls Scouts Nations Capitol and Points of Light. She was also appointed to the Department of Transportation Advisory Committee on Human Trafficking and serves on the Advisory Board for the CARE Global Network Leaders.

This marks the first time the Trucking Cares Foundation has presented the newly renamed William “John” Lex Achievement Award, which comes with a $5,000 donation to the winner’s preferred charity. The Trucking Cares Foundation was established in 2018 to help highlight the trucking industry’s countless charitable efforts and community leadership. For too long, the industry’s charitable efforts have been disjointed and disparate. TCF was created to help pool our resources to do while also highlighting those efforts to the masses to help demonstrate broadly the essentiality of giving spirit of our great industry.

“John is a 32-year veteran, with 3.1 million accident free miles. He’s a husband and father of two sons; a dogged advocate for ATA’s issues, who always elevates and shares our industry’s image – a true leader,” said ATA President and CEO Chris Spear. “As a Road Team Captain, he has been a tireless advocate for his fellow drivers, a representative of all the dedicated, patriotic and faithful people that make up this industry. He is a real example of leadership and it is an honor to give him this award.”
Spear presented the award during his annual State of the Industry Address.

A longtime ambassador for the industry, Lex has been an America’s Road Team Captain since 2013, and in 2016 won the Mike Russell Trucking Image Award.

The Trucking Cares Foundation’s Premier Achievement Award is bestowed annually to an individual or company that exemplifies trucking’s spirit of giving. In recognition of the recipients generosity of time and money, the Foundation will donate to the recipient’s 501(c)(3) charity of choice (such charity shall further the Foundation’s mission).

Mike Ducker was recognized on October 7, 2019, for the decades-long tradition of giving back to others in communities across the world and here at home.  Mike has donated to numerous charities and advised many more.  Among his many affiliations, he serves on the national advisory board of the Salvation Army, which supports the mission and focus of TCF, including Humanitarian and Disaster Relief, Eradicating Human Trafficking and Strengthening Trucking’s Relations with Military and Veterans.   In addition, the Trucking Cares Foundation’s mission includes supporting and promoting research, education and leadership development – all of which Mike has done through the years through FedEx and its Foundation, American Transportation Research Institute, and other charities.   Personally, Mike has given considerable time to finding and developing talent, including mentoring and training others within the industry.  Mike was presented a commemorative plaque and representative “check” onstage by ATA President & CEO Chris Spear, TCF Chairman Phil Byrd, and TCF President Rusty Duckworth at the 2019 ATA Management Conference & Exhibition in San Diego, Calif.  The actual check will be sent to the Salvation Army, Mike’s charity of choice, for its work to fight human trafficking and its response to U.S. human disasters, and other programs that are in line with TCF’s mission and focuses. 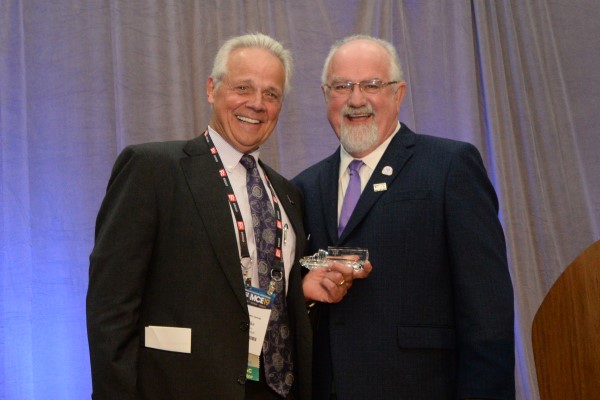 Herschel represents the trucking industry with honor with over three decades, as a driver-trainer for USF Holland, a certified heavy duty technician and a proud America’s Road Team Captain.  Herschel has accumulated three million accident-free miles and was awarded CVSA’s 2018 International Driver Excellence Award.  He is also a six-time competitor at National Truck Driver Championships and a 12-time competitor at the state level, earning Georgia’s Grande Champion title in 2017.  He also has committed his life to charitable works.  Three years ago, Herschel started a truck rodeo called the Safety Drive for a Cure, a truck safety and skills competition benefiting the Pediatric Brain Tumor Foundation.  Hundreds of drivers travel from across the country to compete at the Atlanta Holland terminal, improving their safety skills and supporting a cause.  Last year, Safety Drive for a Cure raised $30,550 with 116 drivers competing from 21 states and 31 sponsors.  Herschel is also involved in the Convoy of Care, helping deliver critical supplies to families affected by major natural disasters, such as the flooding in Baton Rouge, tornado victims in southern Georgia, and flood victims in Houston, Texas.